Zachary Piona, former Vine Star and current social media personality, tweeted about a broken cone he found in his box of Drumsticks. His initial tweet has over 1.8k retweets on Twitter, showing that his comedy resonated with his fans. I reached out to him about the issue within hours of his first tweet, and had three new boxes of Drumsticks to him in under 24 hours. His follow up tweet has 1.3k retweets, and Zachary reached out via DM to talk about how much he appreciated our quick response. A negative experience flipped to instead create deeper brand loyalty. 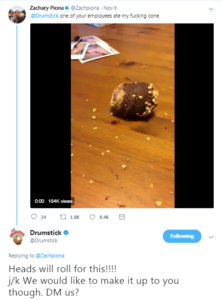 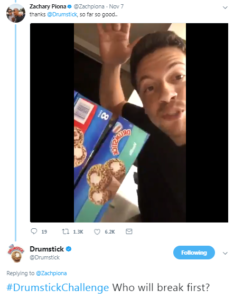